What Is Nigiri Sushi? 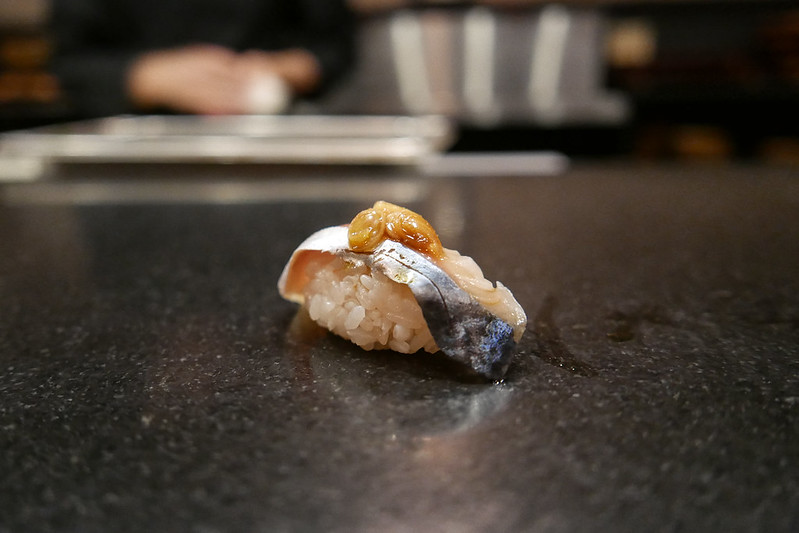 Nigiri sushi is a type of sushi composed of sushi rice – rice mixed with vinegar, sugar, and salt – and typically seafood. Atop a bite-sized portion of sushi rice, a thin slice of (often raw) fish or other seafood is placed. The topping is frequently affixed with the help of a dab of wasabi or strip of nori (seaweed). 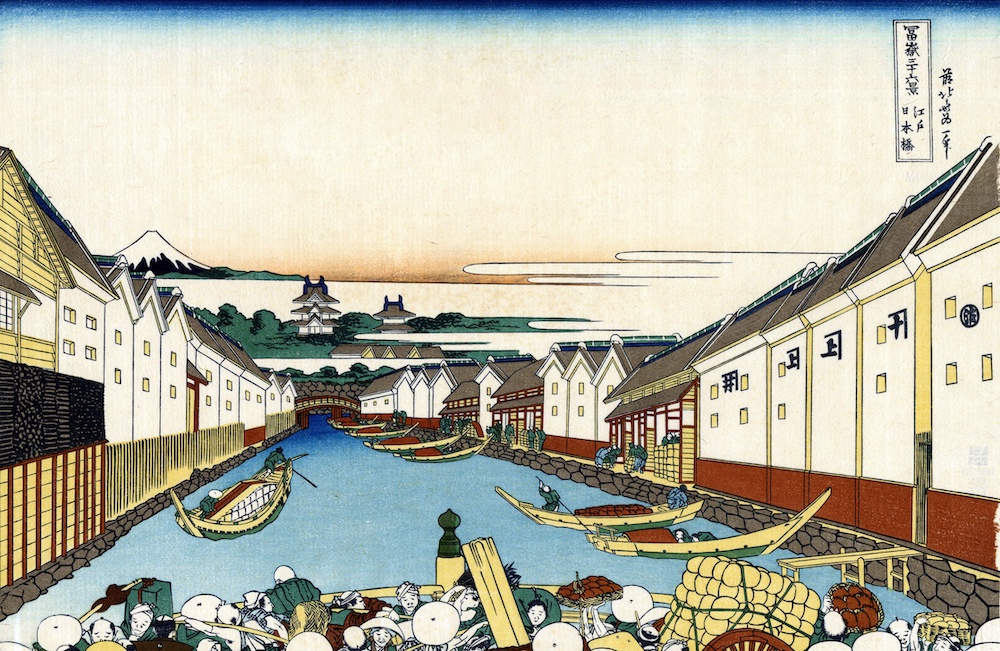 Nigiri sushi originated in the Kanto region in the early 1800s, where it was coined “Edomae sushi” – Edo is the former name of what is now known as Tokyo and “mae” means “in front of”. It is widely thought that the namesake alludes to the fact that the seafood used in the original nigiri sushi was harvested from the nearby waters of Tokyo Bay. Because refrigeration technology didn’t exist at the time Edomae sushi arrived on the scene, the fish and seafood was marinated and preserved with soy sauce, salt, and vinegar. This contrasts with the nigiri sushi popular today, which often features raw seafood.

When is Nigiri Sushi Eaten in Japan?

Expensive nigiri sushi is often eaten for special meals and celebrations in Japan, though more affordable options are available at convenience stores and supermarkets as a form of fast food. The quality of the ingredients influence the variation in price.

Nigiri sushi is written in Japanese as 握り寿司. Nigiri (握り) refers to grasping, given that the rice of nigiri sushi is carefully formed using one’s hands and fingers.

Comparing Nigiri Sushi With Other Types of Sushi

With all the different types of sushi, it can be confusing to sort out what’s what – especially when the terms are often used incorrectly. We hope we can reduce some of the confusion!

What’s the Difference Between Nigiri Sushi and Sashimi? 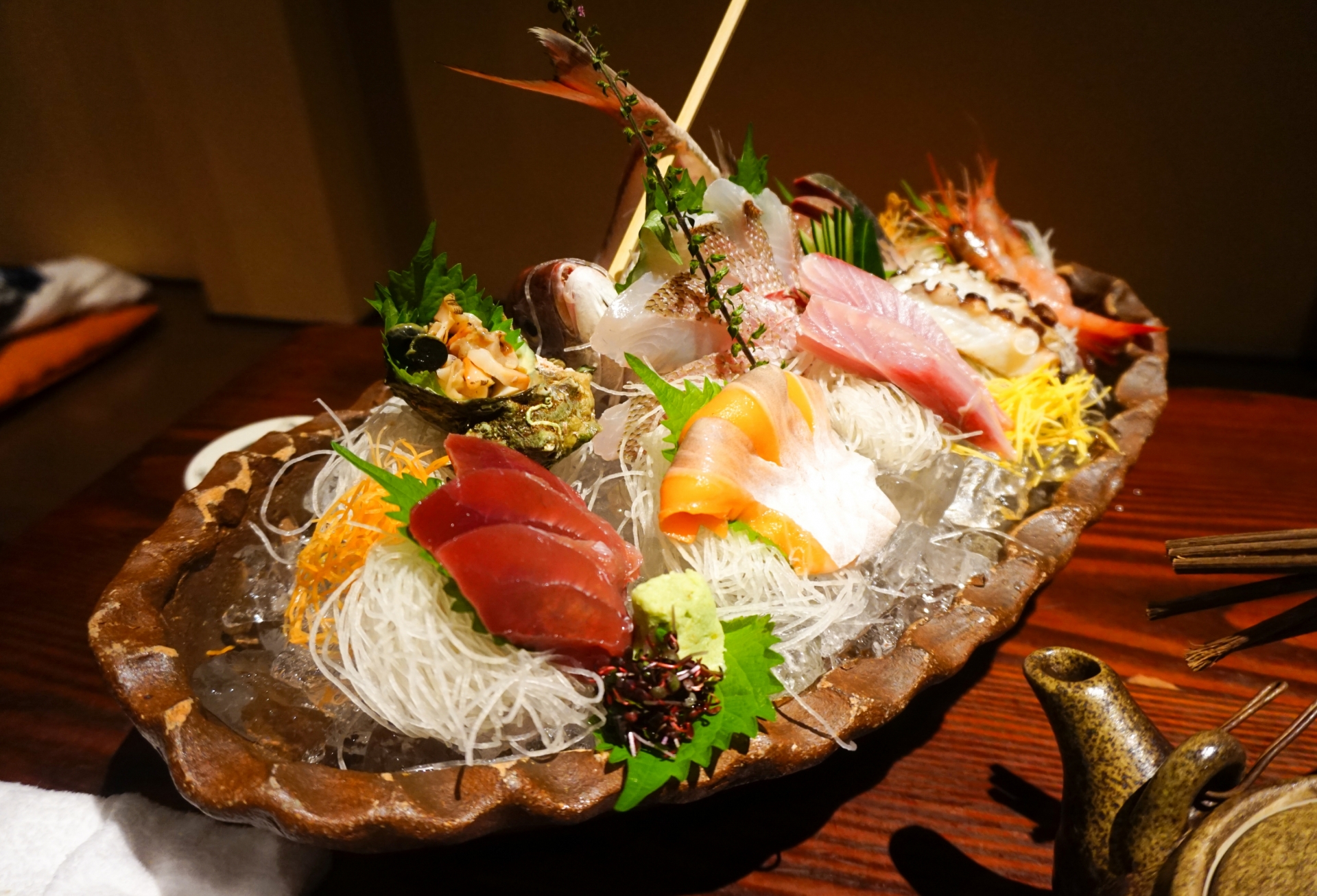 Nigiri sushi refers to the type of sushi composed of fish and seafood, often raw, atop sushi rice.
Sashimi, a commonly misused word, is distinct from sushi in that it does not contain any rice. Sashimi instead is a dish in which the flavor of the raw ingredients is enjoyed. The food is cut into bite-sized pieces that are easy to season with soy sauce and eat. Oftentimes, sashimi refers to raw fish and seafood that is eaten without any rice accompanying it. More broadly, however, sashimi is a term applied to any dish in which the taste of the ingredient is enjoyed in of itself. This includes other kinds of raw meat and vegetables that are eaten alone to appreciate their freshness and flavor.

What’s the Difference Between Kanto Sushi and Kansai Sushi?

Food culture in Japan varies widely by region. The sushi representative of the Kansai region, where nigiri sushi was born, differs for what you’ll find in Kanto.

Kanto sushi, also known as Edomae sushi, is characterized by the varied and ingenious methods of flavoring its ingredients. These include steaming the ingredients, boiling them with salt and vinegar, and adding a dash of sauce. The sweetness of the sushi rice is typically quite mellow to balance the stronger flavors of the toppings. Soy sauce is often skipped as well, because the sushi already carries its own taste. The busy lives of those residing in Kanto has popularized nigiri sushi styles that can be made and eaten quickly.

In contrast, Kansai sushi evolved from the tradition of fermentation. Being farther inland than the Kanto region, the development of preservation techniques for fish and seafood was key before the invention of refrigeration technology. Oshizushi has become representative of Osaka sushi, in which sushi rice and toppings are pressed into a wooden frame box before being cut into angular shapes. Kansai sushi rice contains more sugar than that in Kanto, and is firmer in order to retain its form during the pressing process. While lighter fish such as mackerel and white fish are not abundant in the Kanto region, these fish are oshizushi staples. The more relaxed temperament of those in Kansai matches up with the longer shelf life of Kansai sushi.

Sushi meshi, also known as shari, is the rice used in sushi dishes. It is cooked rice mixed with vinegar, sugar, and salt.

Sushi neta refers to the sushi toppings, or the ingredients placed on top of the bite-sized piece of rice to form nigiri sushi. There are countless kinds of toppings available, and the list is ever-expanding. While fish and seafood are traditional, options like steak and raw ham can be found in conveyor belt sushi restaurants today. In addition, there are an increasing amount of vegan and vegetarian sushi neta options.

A dab of wasabi is often used to help bind the sushi rice with the topping. This spicy green condiment, similar to horseradish and mustard, adds a little punch to the nigiri sushi. 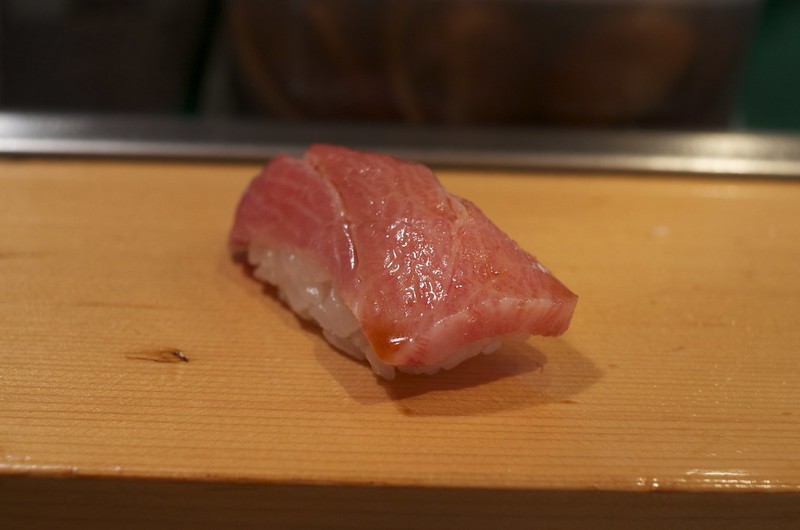 Otoro is the fattiest, and most desirable, part of the tuna fish taken from inside the belly. During the Edo period, bans on meat like beef meant that the Japanese did not develop a taste for fatty meats until later on. Today, however, otoro is very popular (and expensive) due to changing tastes.

Chutoro blends the otoro and akami of tuna, composed of both fatty and meaty textures. 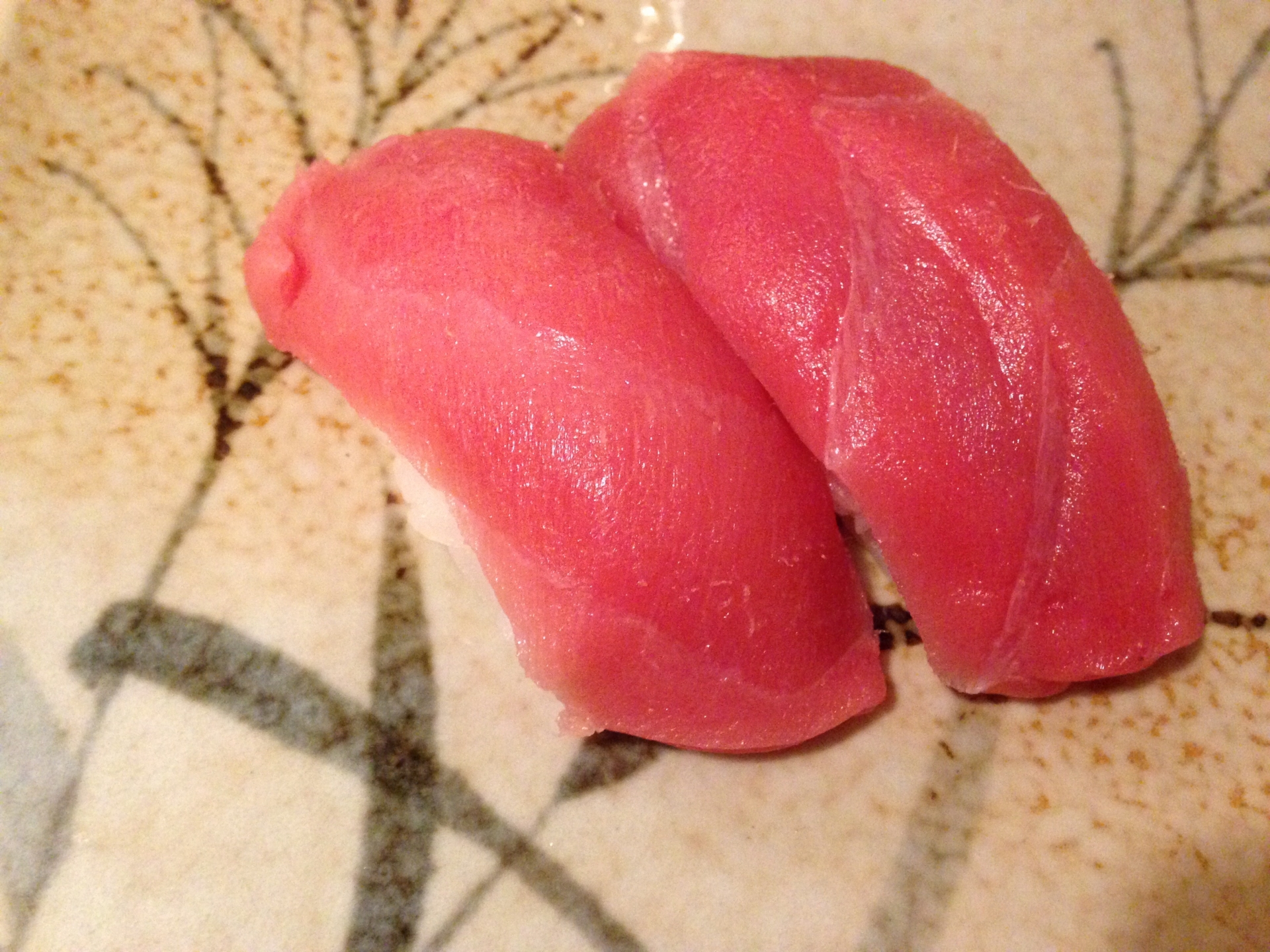 Akami, on the other hand, is the main meat of the tuna fish and thus the most common. Its name literally means red meat, referring to the vivid red color of raw akami. 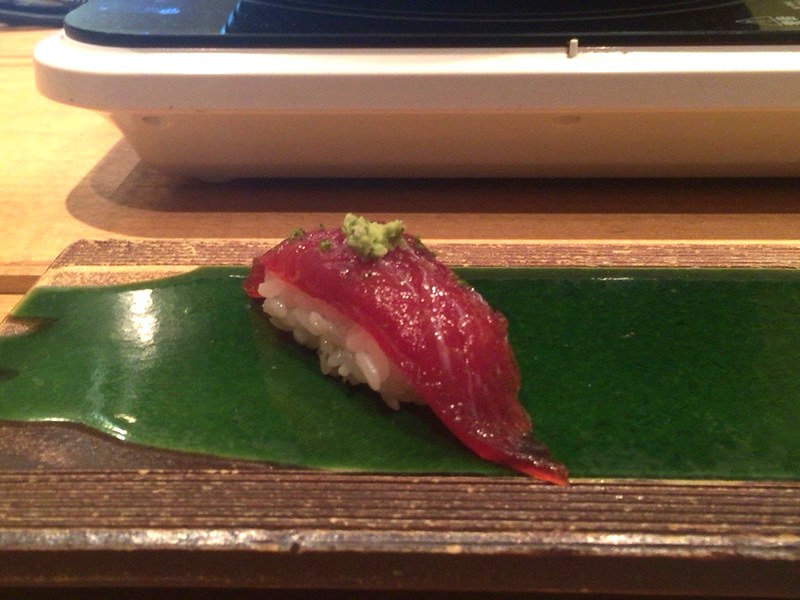 Known as bincho maguro in Japanese, albacore tuna is smaller than other tuna fish and has a slightly paler color. With its soft texture, it is relatively inexpensive and often enjoyed after being processed via frying or canning. 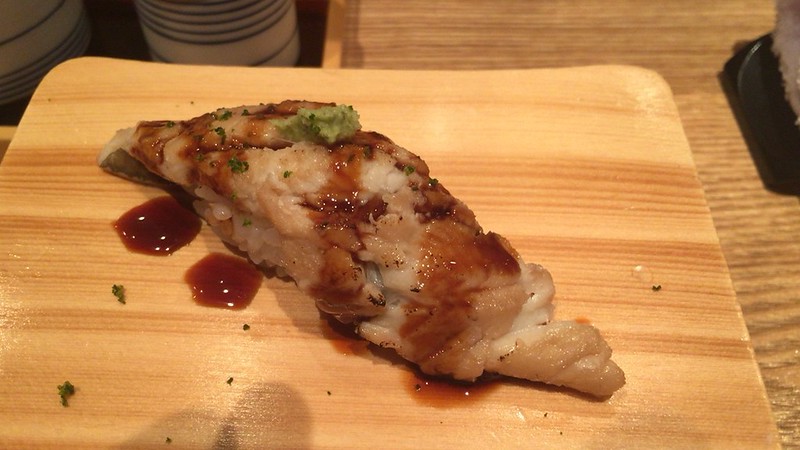 Eel, or anago, is served as a nigiri sushi topping in a variety of ways. In Kanto, the eel is often simmered and softened to the point that it melts in your mouth. In Kansai, on the other hand, grilled eel reigns. It is less fatty and very flavorful, with a light and elegant taste. 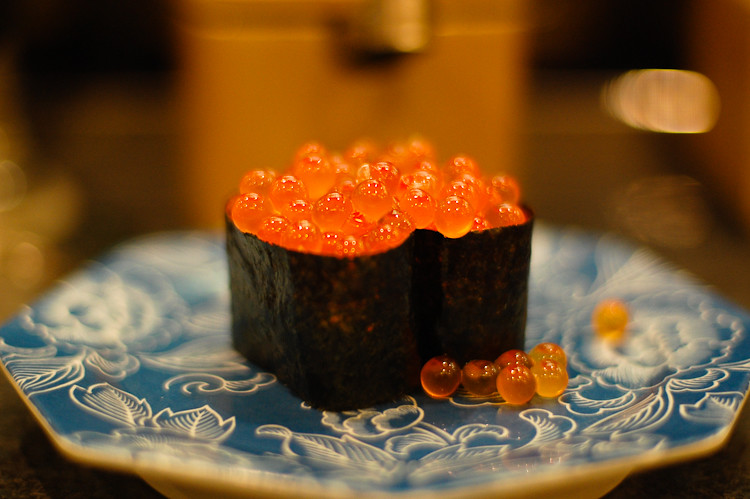 Salmon egg is a very popular nigiri sushi ingredient among people of all ages in Japan. Its name in Japanese, ikura, comes from the Russian word for caviar (ikra). 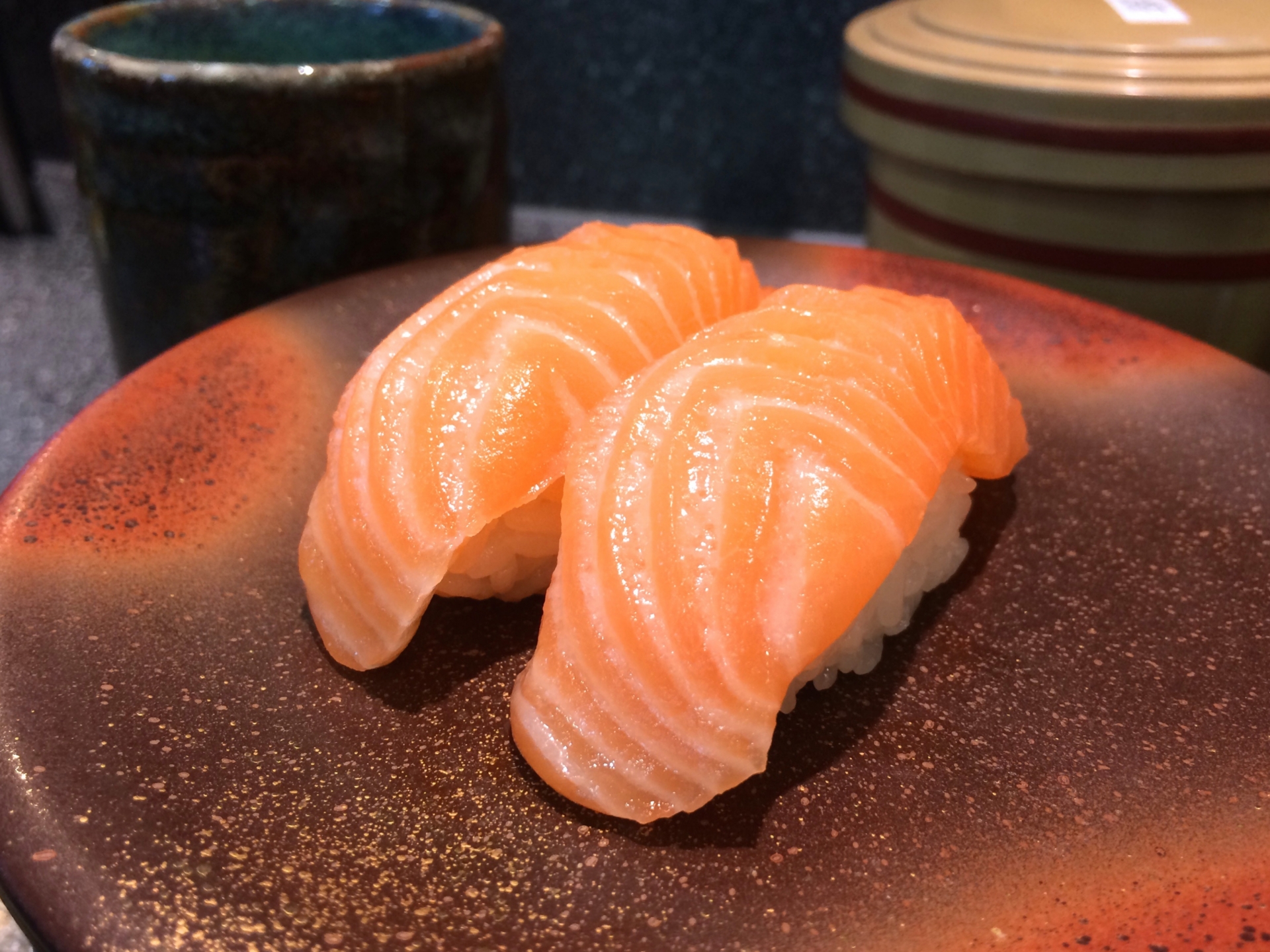 Though it depends on the season, salmon is a relatively fatty fish that has gained popularity in Japan in recent times. Though there is no tradition of eating raw salmon with nigiri sushi from earlier times, preservation technology developed overseas has made this a popular option today. 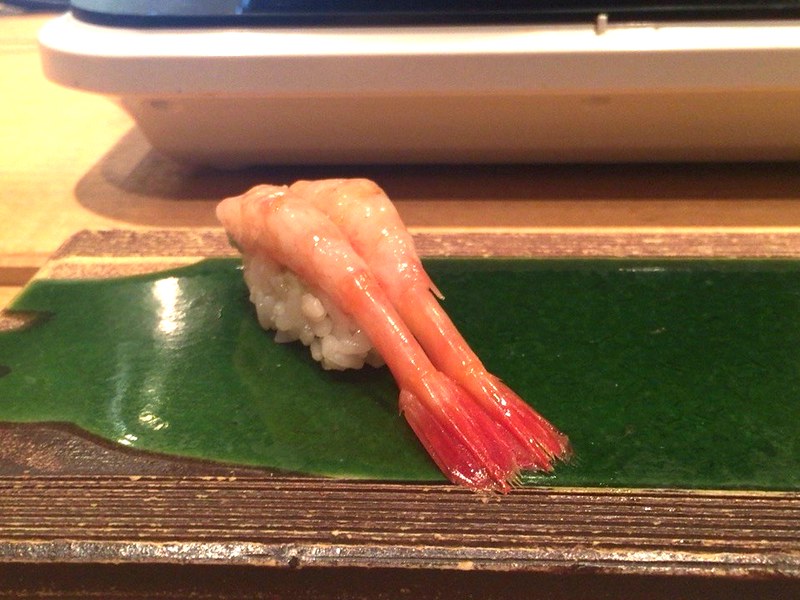 Its name in Japanese literally meaning “sweet shrimp” (amaebi), this nigiri sushi ingredient has a sweet flavor when eaten raw. However, it is often also fried before consumed. 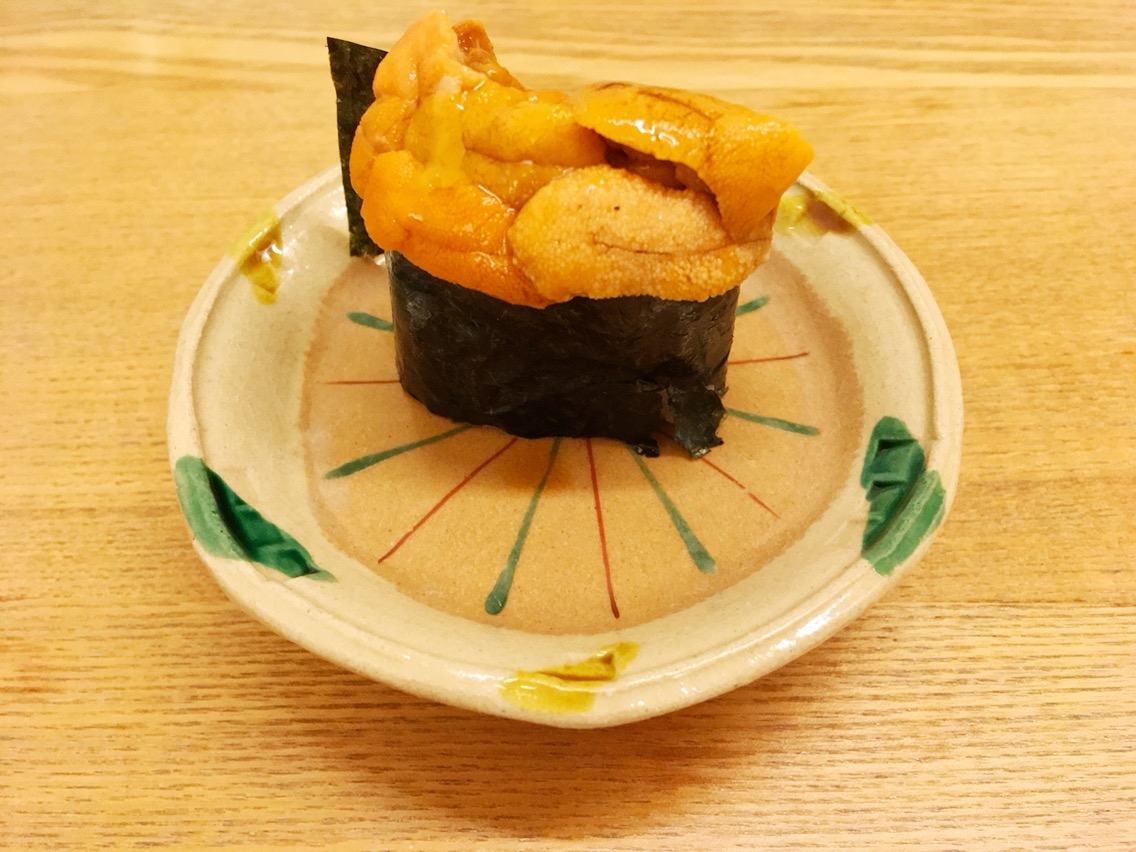 Sea urchin, or uni, is considered one of the most elegant and tasty nigiri sushi toppings. It has a refreshing taste, pairs well with alcohol, and is popular among adults in Japan. The different types of sea urchin found in nigiri sushi include murasaki uni, bafun uni, and aka uni.

How Do You Eat Nigiri Sushi?

There is often some confusion when it comes to ordering and eating sushi, and how to do it “properly”. We’re hoping to help clear the air by answering common questions below!

Do you eat nigiri sushi with chopsticks or your hands?

Either is acceptable! If you want to play it safe, especially around eldlerly or more traditional folks, eating with your hands is typically recommended. However, the pickled ginger (gari) that accompanies sushi is always eaten with chopsticks. Whether you choose to eat your nigiri sushi with your hands or chopsticks, try to finish each roll in a single bite. It’s considered rude to return a partially-eaten roll back to your plate.

In what order should you eat nigiri sushi?

There aren’t any strict rules or customs when it comes to the order in which you eat your sushi. It is important to bear in mind, however, that starting off with strong flavors may make it more difficult to pick up on the nuances of ingredients you eat afterwards. If you’re at a restaurant and the sushi is served on a plate, often the sushi is meant to be enjoyed from the lefthand side. The chef has arranged the rolls in a manner that they think best highlights the ingredients’ flavors.

How do you add soy sauce to nigiri sushi?

In general, soy sauce is not directly added to sushi. Instead, it is served alongside sushi in a small dish (shoyuzara), which the sushi is then dipped into. Wasabi can be mixed with soy sauce in this dish to add heat. For nigiri sushi, you’ll want to rotate the roll when dipping so the topping makes contact with the soy sauce. By avoiding soaking the sushi rice in soy sauce, you avoid overpowering the flavor of the sushi ingredients. Gunkan maki, a type of nigiri sushi that contains soft and loose ingredients (like salmon roe), is a little trickier. It is recommended to dip some pickled ginger into soy sauce and eat it with the gunkan maki roll to add soy sauce flavor.

Do you have to eat sushi with wasabi?

If you don’t like the taste of wasabi and prefer eating your nigiri sushi without it, that’s totally fine! When ordering at a sushi restaurant, feel free to request they leave out the wasabi. If you’re at a conveyor belt sushi restaurant, there are typically sushi rolls that don’t contain wasabi.