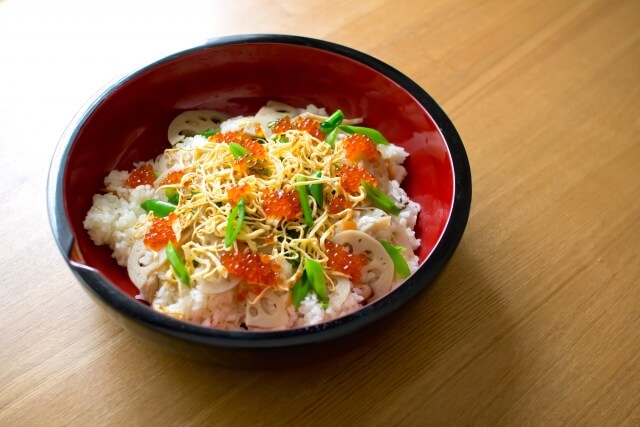 What Is Chirashi Sushi?

Chirashi sushi is a variation of Edomae sushi, which originated in Tokyo (then Edo) during the Meiji Period (1868-1912). Fresh fish and seafood from the nearby Tokyo Bay were integral ingredients to early chirashi sushi in Edo, which favored raw toppings. The greater distance from the sea to other regions in Japan resulted in a different spin on chirashi sushi. Outside of Tokyo, chirashi sushi is called gomoku sushi and includes cooked ingredients mixed into the vinegared sushi rice.


There is also Okayama Prefecture’s bara sushi, which is similar to gomoku sushi. During the Edo Period (1603-1868), a major flood affected Okayama. During the following period of hardship, the government imposed a “one soup and one side dish” ordinance. In order to get around this, it is said bara sushi was invented to sneak more fish and vegetables into meals by finely chopping, mixing, and hiding them in the rice.

When Is Chirashi Sushi Eaten in Japan?

Due to the simplicity of how it’s made, chirashi sushi is a favorite home-cooked meal in Japan. In addition, it’s a traditional dish to eat in the spring for Hina Masturi, or Girl’s Day or the Doll Festival. This celebration, which takes place on March 3rd, is based around praying for the happiness and health of young girls in Japan. The ingredients used in chirashi sushi are intentionally selected to align with this goal. For example, shrimp symbolizes longevity and the lotus root is believed to confer good luck. The colorful appearance of chirashi sushi and its use of seasonal, healthy veggies moreover makes it the perfect dish to celebrate spring with!

Chirashi sushi literally means “scattered sushi” in Japanese, referring to the manner in which the sushi toppings are dispersed throughout the rice.

What’s the Difference Between Edomae Chirashi Sushi and Gomoku Sushi?

The differences between Edomae chirashi sushi and gomoku sushi lie in the region they were popularized, their ingredients, and how they are prepared.

True to its name, Edomae chirashi sushi originated in Edo (now known as Tokyo). The city’s close proximity to Tokyo Bay meant that fresh fish and seafood could be used to top off the locale’s spin on sushi. In the early days, raw scallops and salmon roe were popular toppings to put on vinegared sushi rice in a bowl. (Side note, when the rice is not vinegared, the dish is referred to as kaisen donburi, or seafood rice bowl.)

Gomoku sushi, on the other hand, was popularized in regions other than Tokyo. Before the advent of refrigeration technology, it was difficult to keep raw seafood fresh and unspoiled. Therefore, areas farther inland than Tokyo boiled and cooked the ingredients to better preserve them. “Gomoku” is a reference to the typically five ingreidents gomoku sushi contains that are mixed into the rice. Gomoku sushi is also called bara sushi in the Okayama region.

While the ingredients used in chirashi sushi depends on the type that is being prepared, there are fundamental ingredients common to all styles: sushi meshi and sushi neta, described below. In addition, because chirashi sushi is a popular home-cooked dish, there is a lot of variation when it comes to the toppings used in at-home cooking. It often comes down to personal choice and access to ingredients.

Sushi meshi, also known as shari, is the vinegared rice used in Japanese sushi. It was typically seasoned with sugar and salt as well.

Besides the rice, sushi neta refers to the ingredients in chirashi sushi. This includes fish, seafood, vegetables, and other garnishes.

The ingredients used in Edomae chirashi sushi are often similar to those used in nigiri sushi, another style of Edomae sushi. This includes raw seafood like tuna, squid, octopus, scallops, and salmon roe.

As mentioned above, in contrast to Edomae chirashi sushi, gomoku sushi makes use of cooked ingredients. Common toppings include boiled shiitake mushroom and fried chicken, lotus root, and green beans. Sakura denbu – a pink garnish made from seasoned codfish – and tsukudani – foods simmered in soy sauce and mirin – are popular ingredients to decorate and add color to gomoku sushi with.

How Do You Eat Chirashi Sushi?

Although Japanese people also frequently make this mistake, soy sauce should not be poured directly over chirashi sushi. This is frowned upon and considered bad manners. The soy sauce not only turns the rice brown and makes the dish less attractive, but soaking the rice in soy sauce also detracts from the delicate flavors of the sushi rice and ingredients. Similar to how you eat other types of sushi, the proper way to enjoy chirashi sushi is by having a small plate of soy sauce on the side. Using chopsticks, dip chirashi sushi toppings in the soy sauce and return it to the rice before eating. It’s moreover preferable to eat chirashi sushi slowly from the edge of the bowl or box, instead of eating from the center and creating an unsightly hole in the middle of the dish. Enjoy!

Learn About Other Types of Sushi!