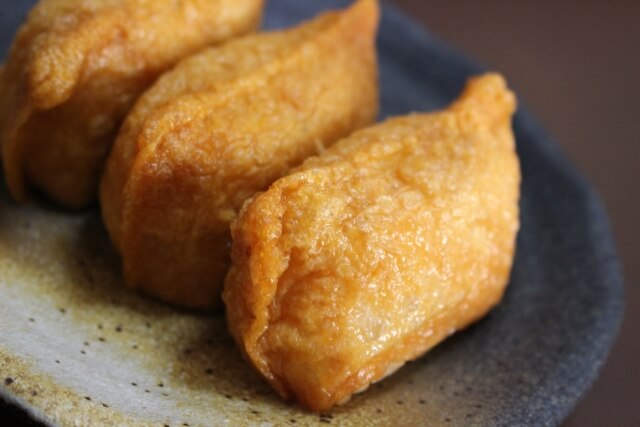 What Is Inari Sushi?

Inari sushi is a simple style of sushi made of sweetened rice packed into pouches of seasoned aburaage (deep-fried tofu) pouches. It is easy to make and eat, and is enjoyed everyday in Japan as a type of fast food. It is also called kitsune sushi (“fox” sushi) and konkon sushi.

Inari sushi was first introduced in Japan during the Edo period in the late 18th century. Its exact origins are unknown, though its namesake is a reference to Inari shrines. These shrines scattered across Japan are dedicated to a kami (deity) of fertility and business prosperity, and are associated with foxes. Japanese folklore claims that foxes love aburaage, and thus aburaage was a common offering to leave at shrine grounds. Over time, rice was added to the aburaage – and thus, inari sushi was born.

When Is Inari Sushi Eaten in Japan?

Due to the ease in which inari sushi is made and eaten, it is a popular and affordable dish across Japan. It can be picked up as a quick meal in convenience stores and supermarkets, while also being available at sushi and other Japanese restaurants as a side dish. Since inari sushi can easily be made at home and travels well, it’s a popular choice for bento (packed meals) to take to school, work, or a picnic.

Inari sushi (いなり寿司) gets its name from Inari shrines. These shrines are used to worship the Shinto deity Inari, who is associated with foxes, rice, fertility, agriculture, and industry.

What’s the Difference Between Inari Sushi in Kanto and Kansai?

Food culture and various traditional Japanese dishes evolved quite differently in the Kanto and Kansai regions. Inari sushi is no exception. In Kanto, aburaage pouches are rectangular shaped, reminiscent of a rice bag. In contrast, aburaage pouches are triangle shaped in Kansai. The shape has been likened to fox ears – remember that according to Japanese myth, foxes love aburaage. Another difference between the two types of regional inari sushi lies in the rice filling. While Kanto-style inari sushi usually contains only vinegared rice, Kansai inari sushi often has other ingredients mixed into the rice. This is why Kansai inari sushi is also called gomoku inari, its Japanese name alluding to the fact the roll contains five ingredients total – three in addition to the rice and aburaage.

The deep-fried tofu skin that makes up the outside pouch of inari sushi is called aburaage. The aburaage is typically simmered in dashi, sugar, and soy sauce to give it a sweet and savory flavor.

How Do You Eat Inari Sushi?

Since this sushi is already nicely packed in little pouches, it is exceedingly easy to eat on the go without having to fear making a mess! You can eat it either with your hands or chopsticks, adding soy sauce only if you’d like – the aburaage already carries a lot of flavor.