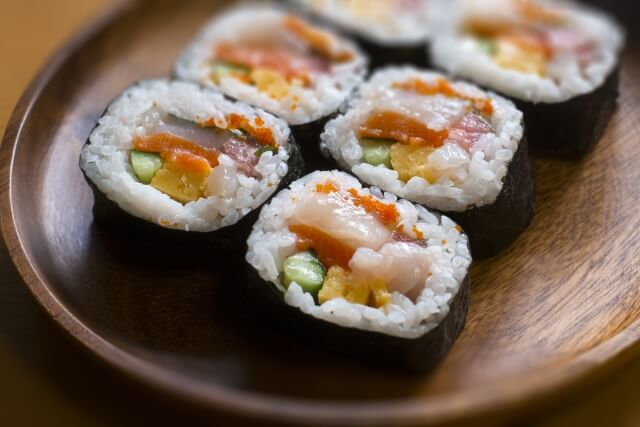 What Is Maki Sushi?

Maki sushi is an easily recognizable, classic style of sushi that consists of rice and other ingredients rolled inside a sheet of seaweed (nori). It’s made by first adding a layer of vinegared sushi rice on a sheet of nori. Then, sushi toppings like seafood, vegetables, natto, and egg are added on top of the rice. The sushi rice and fillings are then rolled into a tight tube with the seaweed on the outside, before rolls are cut from it – similar to a roll cake.

Maki sushi is thought to have first arrived on the scene during the Edo period, in the latter half of the 18th century. Though it likely originated in Edo (modern Tokyo), it quickly spread to other regions of Japan that adopted their own maki sushi styles. In the Kanto region (home to Tokyo), narrow hosomaki sushi rolls that feature only one ingredient were common. In contrast, the Kansai region (home to Osaka) popularized futomaki rolls that are packed with many more sushi toppings. Access to different ingredients and cultural differences account for variances in regional maki sushi.

When is Maki Sushi Eaten in Japan?

Due to its compact form, maki sushi is a popular option for bento – a single-portion meal packed in a box. Compared to other delicate sushi styles, maki sushi is more hardy and less likely to break. While being readily available at konbinis (convenience stores) and grocery stores around the country as a form of fast food, it is also offered at more upscale sushi restaurants. Ornamental maki sushi, carefully and beautifully crafted, is also a popular dish for celebrations and special occasions in Japan.

Maki sushi is written in Japanese as 巻き寿司, where maki (巻き) means to roll. Of course, maki sushi is made by rolling the rice and ingredients in a sheet of nori. Furthermore, the bamboo mat used to roll the sushi is called a makisu (巻きす).

Maki sushi can be divided into three types according to its size: hosomaki (small), nakamaki (medium), and futomaki (large). There are further classifications of maki sushi that depend on its shape, ingredients, and how it’s eaten. We lay out the basic ones you should know about here!

Hosomaki is the smallest type of maki sushi, characterized but its thin shape made possible by a single filling (other than rice). Because this sushi is small and easy to eat, it is a common form of fast food in Japan that is sold at convenience stores and supermarkets. Below are some of the most common hosomaki rolls.

Kanpyo is a type of dried gourd strip that is soaked and seasoned before being rolled into hosomaki. 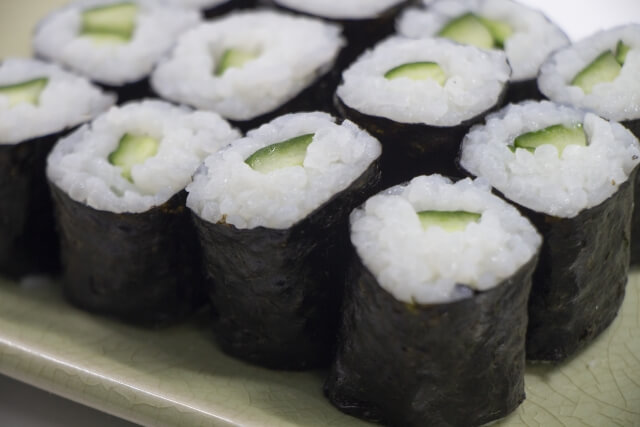 Kappa is the Japanese word for cucumber. As the name suggests, this refreshing and simple hosomaki consists of rice and cucumber wrapped in nori.

Pickled yellow daikon is the sole filling in shinko maki. 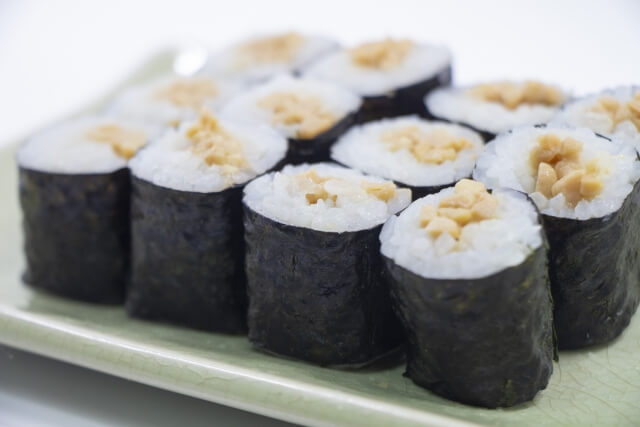 This type of hosomaki contains fermented soy beans, or natto, that has a very strong and distinct smell. 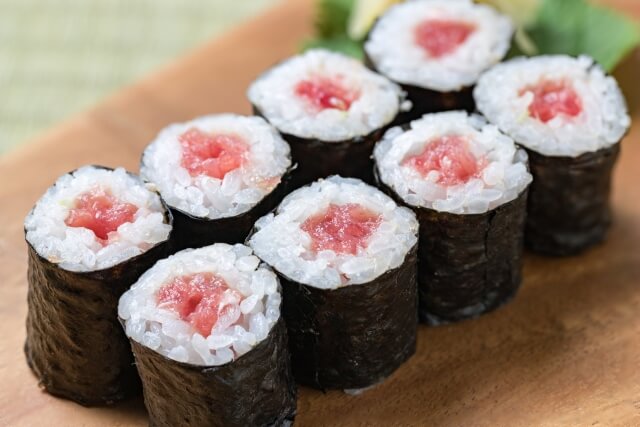 Written with the characters meaning iron (鉄) and fire (火), this hosomaki gets its name from the bright red color of the maguro tuna it contains.

On the opposite end of hosomaki is futomaki, which is a thick maki sushi roll that contains many ingredients alongside rice. Popular fillings include: seafood such as shrimp, crab, and eel, egg, tofu, and a wide range of vegetables. Ehomaki is a famous type of futomaki that is eaten during Setsubun – a festival held before the start of spring. 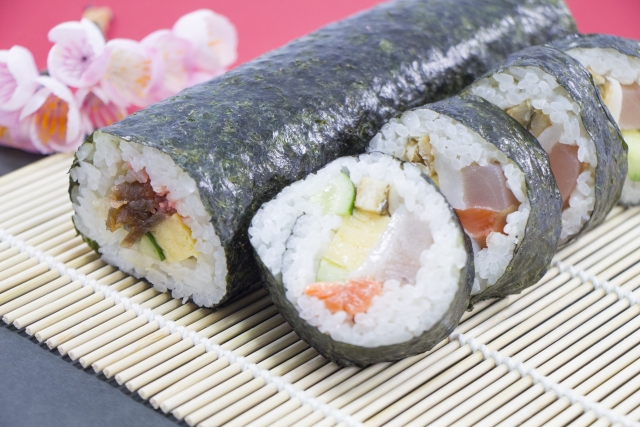 February 3rd marks the day before the beginning of spring in Japan, known as Setsubun. The tradition of eating ehomaki during Setsubun likely started in the Kansai region, but is now practiced around the country. As seven is seen as an auspicious number and there are seven gods of fortune in Japanese folklore, ehomaki is defined by the seven ingredients it contains. While maki sushi is usually sliced into bite-sized pieces after being rolled, ehomaki is usually eaten as a thick, uncut roll.

In between hosomaki and futomaki lies nakamaki, a maki sushi roll that typically includes two to three kinds of ingredients.

Other Types of Maki Sushi 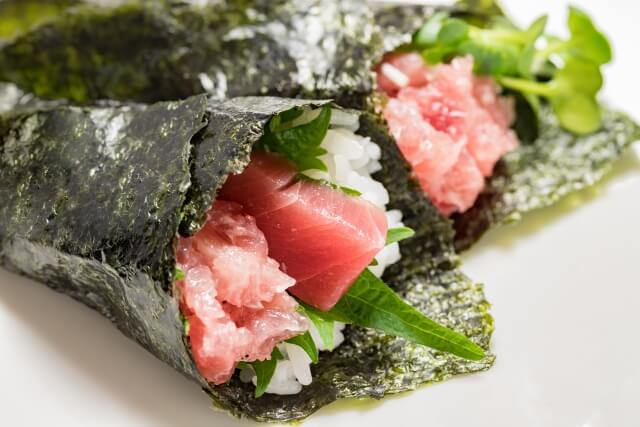 This hand-rolled sushi is distinguished by its cone shape. It is a popular way to eat sushi with family and friends in Japan, as it requires no special tools to make. 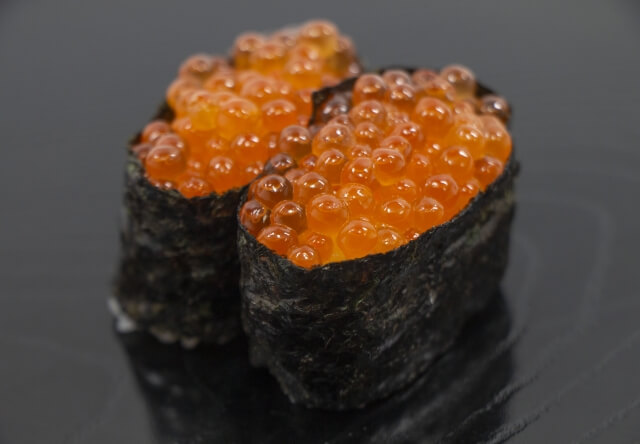 This type of sushi uses ingredients that are tough to contain, such as salmon roe and sea urchin. A tall strip of nori is used to wrap around the sushi rice and toppings to fence everything in. A Japanese character relating to warfare and troops, 軍 (“gun”), gives this maki sushi its name – the shape resembles a warship.

The rice and nori is reversed in uramaki rolls, with the rice on the outside and nori wrapped just outside the filling. This style was popularized in the United States as a way to make sushi look more attractive to Americans unfamiliar with seaweed. The California roll is an example of uramaki.

Sushi meshi, or shari, is the vinegared rice used in all sushi types. Along with vinegar, it is also flavored with sugar and salt.

Sushi ingredients are called sushi neta in Japanese. There are a wide variety of sushi toppings used in maki sushi, from seafood to vegetables to more contemporary additions.

A sheet of dried roasted seaweed is the key to rolling and holding the maki sushi together.

Hardy seafood like tuna, shrimp, and eel are typically used in maki sushi rolls, as well as fried egg. In addition, vegetables like cucumber, shinko, kanpyo, and natto are traditional and popular ingredients. However, changing times, access to ingredients, and influences from other cultures and cuisines means that the sushi neta list for maki sushi is ever-expanding within and outside of Japan – mayonnaise and cream cheese, for example, are more modern additions from the West.

How Do You Eat Maki Sushi?

Except for special circumstances – like ehomaki – maki sushi is typically cut into bite-sized pieces for serving. You can use your hands or chopsticks to pick up your maki sushi, before dipping it in soy sauce if you’d like. If possible, eat the roll in a single bite as it is considered rude to return a partially-eaten roll to your plate. Enjoy!